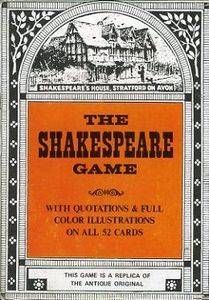 Victorian game in which each of the 52 cards represents a scene from a Shakespeare play (with fabulous card art!) and has a quote from that play printed on it. It could be played in any of three ways. In the preferred method, a slightly souped-up version of "Authors," the player to the left of the dealer reads the quote on one of his cards. If the next player knows which play the quote is from and needs that card for a set of the four scenes from that play, he gets it. Completed sets are laid down on the table, and whoever has the most sets at the end of the game wins. "When mere amusement is desired and the educational feature not cared for," the second game play method is the most basic version of "Authors" in which the players ask each other if they have a card for a particularly play. The third game play method is, strangely, a non-bidding four-handed partnered trick-taking game in which the four series of scenes substitute for the four suits in a regular card deck, with the "A" series always being trump. The maximum number of players for the third method is four. The maximum number for the other methods could be higher, but it might prove difficult to build sets. The approximate playing time is a guess. Bottom line: I guess they knew their Shakespeare a lot better at the start of the 20th century than we know him at the start of the 21st.