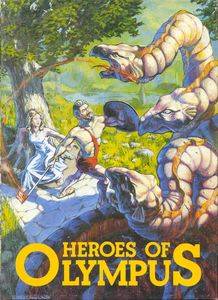 A game set in Ancient Greece, complete with all the gods and fantastic monsters. Playable as an RPG, a wargame, and/or a boardgame. It includes background on gods, limited magic (from gods or magic places), sample races, and pre-generated characters from the Argonauts (the game is clearly aimed at reproducing the feel of the movie Jason and the Argonauts). It uses a skill-based system, with point-bought character creation. There are three combat systems: Noble (i.e. dueling), Melee, and Naval. They are fairly complex, although Melee is fairly fast. (Entry extracted in part from the RPG Encyclopedia, http://www.darkshire.org/~jhkim/rpg/encyclopedia/) There was a second edition in 1983. This was identical to the first edition with the exception of these changes: the box was deeper and had different cover art, a blank character sheet was included, a Different Worlds article reprint ("Thieves of Sparta," on integrating the game with Thieves' World) was included, and a pack of miniatures (a ship and three figures) was included.