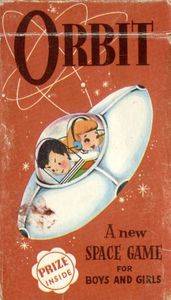 Kids' game consisting of forty cards: five each of a Space Ship, Pilot, Co-Pilot, Space Scanner, Control Panel, Landing Tower, Space Chart, and Blast Off. Depending on how many players participate, you take out a number of sets of these cards, then deal out 8 or 9 cards to each player and begin passing one unwanted card per turn to the left. (In the two-player game, the players can discard and draw in addition to passing back and forth.) The first player to get a full set of one of each type of card and yell "ORBIT" wins the game. There is no copyright or release date on the game, but it dates from the late 1950s or very early 1960s. The card art is reminiscent of the "Jetsons" style. As one might expect, the Pilot is a boy and the Co-Pilot is a girl. The game was re-released as "Space-O" later, but the interior text continued to say "Orbit," at least in early printings. It was one of Arrco's six Pla-Mor games, "developed, in consultation with child guidance specialists, to teach while they entertain."