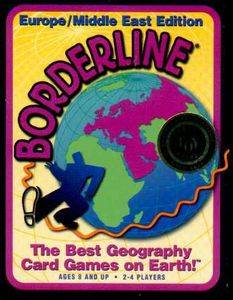 This Crazy Eights variant was designed by TV star John Davidson and his wife. Players start with hands of 8 cards which come from a deck consisting of nations from Europe and the Middle East, bodies of water, and wild cards. The cards have the name of the location on one side and a map on the other side, showing contiguous locations. The object is to void your hand by playing a card with something that shares a borderline with the last card played. Wild cards when played are automatically considered a match and can then be named as any location in the deck except for those in the player's hand. If a player cannot play a contiguous card, cards are drawn from the deck and added to the player's hand until a card can be played. Instead of drawing, a player can play a card that does not share a borderline and hope to not be challenged. Challenges can happen after any play. If the challenging player is correct, and the card played does not share a borderline, then the challenged player has to take back the card and take a card from the challenging player's hand. If the challenge is incorrect, the challenger takes a card from the deck and the challenged player gets another turn.