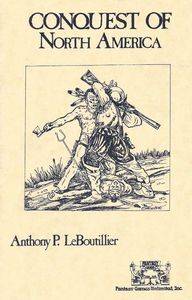 Multi-player board game set in the time of European colonization of North America. Indian confederations (the Algonquin, Cherokee and Iroquois) and colonist groups (Dutch, English, Spanish and French) compete for control of America. Conquest of North America is a Diplomacy variant. Components include 22" by 35" map, over 200 counters and rules book. This was Fantasy Games Unlimited's second attempt at producing a boardgame based on the mechanics of Diplomacy (the first was War of the Ring). This one was produced quite a bit more economically. It was sold in a bag, rather than a box, and has a map that is printed on heavy stock paper rather than being a rigid cardboard gameboard.