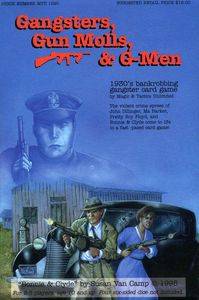 A card game of the 1930s bank-robbing gangster era --Dillinger, Bonnie and Clyde and the rest. Each player attempts to put together a gang and to accumulate the most money. Besides your starting random allotment of gangsters, you can recruit from the deck, other players' gangs or the jail. Some gangsters have natural affinities for each other; if you manage to put together a "compatible" gang, the victory condition is lowered for you and the gang gets a bonus when pulling off jobs. Jobs are resolved by rolling a varying number of dice (depending on the job's difficulty) against your gang's total in Cunning, Charm and/or Combat. Success garners Loot Chits, which are mostly money but also include bonuses to Cunning (to assign to a gangster). Gangster Leaders allow you to draw more action cards; Molls allow you to draw more recruits. Some action cards are starred; this means they are resolved immediately --sometimes to your detriment. The game does a good job of recreating the hectic life of the bank-robbers of the era, constantly on the run from one state to another. The artwork and components are crude, but that's forgivable.