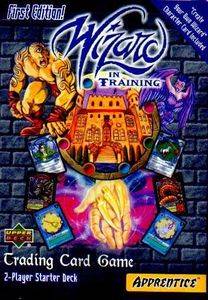 To those lucky enough to enter it's doors, the Dragontooth Academy opens up a whole new world - a world filled with magic spells, enchanted items, and warlike wraiths! Are you ready to become the single student worthy enough to graduate from the Academy as a full-fledged Wizard? [ Object of the game ] In Upper Deck's Wizard in Training card game, each player takes the role of a Dragontooth Academy student as they prepare for the climactic event of the school year - the graduation battle. Players use their wits and the resources available to them as they race to collect Dragonteeth in order to progress through 5 levels of Wizard proficiency. Along the way, they can cast spells against their opponents to steal Teeth and slow their progress. They can also choose to conjure a beast to battle and win Teeth for their cause. The higher the Wizard level, the more powerful the Spells and Duel Characters available to the players become. The first player to progress through all five Wizard levels graduates and wins the game! [ "Create Your Own Wizard" Card ] Each starter deck includes one "create your own Wizard" game card giving players the flexibility to create or bring their own favorite Wizard into play!