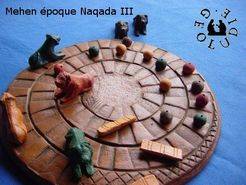 In the 1920s, anthropologists, explorers and adventurers found a curious spiral-tracked game being played by the Baggara Arabs of the Sudan —Li'b el Merafib, “The Hyena Game”. In all essential details the "Hyena Game" seems to have been identical to the Ancient Egyptian game of Mehen (The Game of the Coiled One). The board's shape suggests it may be a distant ancestor of the Game of Goose but the mechanics are so different that this is probably a coincidence. It was played on a spiraling track, employed stick dice (throwing sticks) of precisely the kind known from Archaic Egyptian contexts, and had two types of pieces, one representing a predatory animal. The only difference would seem to be that the ancient Egyptians allotted six counters to each player rather than only one. The Cretan Phaistos Disc may have been a Mehen board, but that remains speculation. Mehen is the only multi-player ancient Egyptian board game known, the others (Senet, Aseb, Hounds &amp; Jackals, etc.) being all two-player games. The main function of the serpent-shaped Egyptian god Mehen was to protect the sun-god Ra from his enemies by coiling around him. In the Old Kingdom, the race-game Mehen took the name and shape of the god: a coiled serpent with the gaming spaces on its back. As "bodyguard", Mehen symbolises the sun-god's immediate neighborhood for the deceased. The deceased walks towards Ra on the back of the serpent-god. By the early Middle Kingdom, the ‘cuts’ used on the snake's back of the Mehen board to separate the playing spaces were thought to ‘kill’ the snake —which would have been a very threatening and evil thing. Mehen’s role was essential, for if Ra were not protected from his enemies, he might not rise in the morning, which would result in the cessation of all life. In Egyptian belief, ‘life’ applied not only to the living but also to the dead, who were believed to travel with the sun and to rise, reborn, with him at dawn. From that time forth, the game apparently ceased to be played, possibly banned and forbidden.