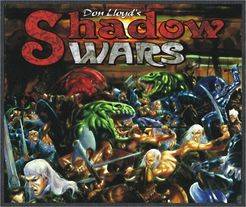 Shadow Wars is a fantasy strategy board game where each player chooses one of the four rulers within the game: Human, Dwarf, Elf or Dark Elf. These rulers have different advantages, disadvantages and play styles. Some rulers have mighty soldiers and defenses but are weaker in magic. Where as, other rulers are extremely powerful when it comes to magic but have weaker and fewer soldiers than the other rulers. Players must learn how to best use their ruler and play against the other three vastly different: Rulers, Units, Creatures, Magic, Buildings and Strategies. A full description and artwork can be found at: http://www.shadowwars.net Each player starts with a Capital, two towns and one special building. From these locations the players can slowly build up their resources to obtain additional Towns, Cities and special buildings. Each new building will give that player an additional advantage, but also takes resources to build. A few examples of these buildings are: Armory, Mine, Mage Tower, Blood Forge, Dark Library &amp; Cathedral. As each individual player expands their empire they can hire vast armies, summon powerful creatures &amp; conquer new lands. With all of the various units and buildings each game is unique and, most of all, fun. The last player with a Capital left standing is the King of Syrrith!