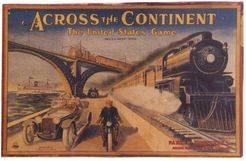 Each player draws a list of cities that they must visit, in sequence, which starts and ends at a particular city. Players roll the dice and move along their chosen routes to reach their target cities. Every time they throw doubles they must draw a card. Most cards have a question about a state capitol that rewards the player for answering correctly, or punishes them for answering incorrectly. Occasionally the cards have no question but just advance the player's car to the next destination. The first player to reach all of their cities and return home is the winner. Originally published 1890 (patent no. 469089), re-released by Parker 1901, 1910, 1922, 1952. This game may well have been the inspiration for the later games Pirate and Traveler, Boxcars and Rail Baron.