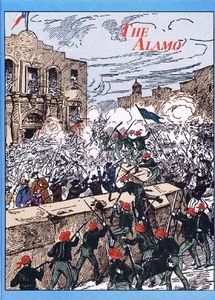 THE ALAMO: VICTORY in DEATH is a two player, tactical level simulation of the assault at dawn March 6, 1836 by 2200 Mexican soldiers against a garrison of 183 frontiersmen inside the Alamo mission in what is now San Antonio. Historically the battle lasted about an hour. In the game the players take turns moving their forces and conducting attacks. The game ends when the Texan player has eliminated a decisive number of Mexican troops or when the Mexicans have eliminated the entire Texan force.