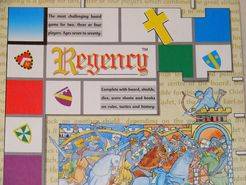 Game for 2 to 4 players which combines strategy with a setting of medieval war and intrigue among the Scottish clans. You are a Clan Chief trying for the regency of Scotland. You can attack other peoples pieces, &amp; depending on whose territory you attack them in they could be injured, captured or killed. Along with attempting to gain the crown, and sabotaging your rivals attempts, you must also try not to get cursed by the witch, for then your lineage would end with your current Heir.