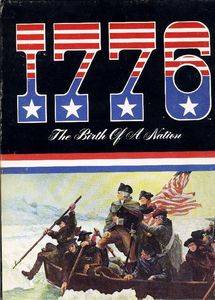 The object of this game is to assume the identity of a famous American Colonist and collect bounty, money and signatures for the Declaration of Independence. This is done through a series of reenactments of historical events from the landing of the Pilgrims through the American Revolution User review: Players start the game with an Identity Card. This tells the player who that person is during the game and what victory conditions must be met in order to win: the number of Signature Cards, bounty units and amount of money. Players also start with $5000 and a pawn on Independence Hall. In turn, players will roll the dice and follow the instructions on whatever space the pawn lands. A player who lands on another player’s space sends the latter player to stock where that player must lose one turn. Players are free to barter Signature Cards, bounty units, and money amongst themselves. Every time a player passes Independence Hall that player gets $1000. A player who reaches Independence Hall with the assigned requirements is the winner.