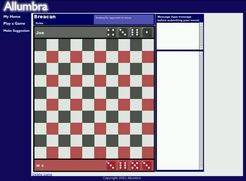 [for more information on this game and to play online, visit www.allumbra.com] Lost in the ancient Celtic migration across Europe, this game was played between the clan chieftains to resolve disputes peacefully rather than resort to a costly and bloody war. It was played on a swatch of ornamental cloth familiar to this day as a "plaid". Instead of stones used in the traditional game, this variation presented here uses as the playing pieces. To win at Breacan - and thus resolve the dispute in your favor, you must be the first to weave a path from one side of the Breacan to the opposite side. Placing the dice On your turn, place two of your four rolled dice. After your turn has ended, two more dice will be automatically rolled to replace the two you rolled. Dice can be placed in two ways: 1. They can be placed on a square of your own color (e.g. red on red) when that square has no vertical or horizontal neighbors. 2. They can be placed on any square as long as each adjacent (horizontally or vertically) neighboring die of your color is either one higher or one lower than the die being placed. Note: 6 can be placed next to a 1 and 1 next to a 6. Winning The first player to complete a path from top to bottom or from side to side is the winner.