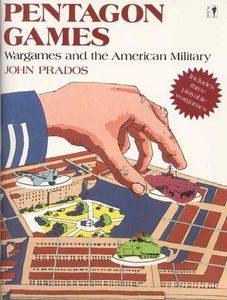 A book containing three games: Pentagon Pentagon is not a simulation in the formal sense of the word. The events in the game are intended to be illustrative and the decisions fictitious, woven from the progress of play. But by giving the players incentives both to compete and to cooperate, the game does simulate bureaucratic politics. And the content of bureaucratic politics is similar in tone and substance to real debates over military budgets. Pentagon shows how political factors influence the shape of budgets before the bureaucracy even gets down to decisions on weapons procurement and their merits. The R&amp;D Game: Congressional Chutes and Ladders The R&amp;D Game is designed as a solitaire game. It is based on a decision-tree mechanism that leads the player through a set of alternative developments. This type of approach is sometimes called a "scripted role" model because the main emphasis is on broad decision choices rather than narrow selection of tactics. Given the broad choice, the decision tree itself generates much of the action, unlike a two-player or multi-player game in which action flows from the decisions of each of the players. The Last Days of Saigon An introductory level wargame. The goal of each player is to destroy the other player's forces, so the game does not follow the historical values. The map is pretty basic, moderately large scale, 3-color with just basic terrain. Units are mostly Brigade-level units with a few regimental and batallion units thrown in. There is a mostly abstract representation of air, and naval units. [Note: This game was also published as 'Last Days At Saigon' in 'Bridge' magazine, Volume 4 #1 (11/75) bound-in, with b&amp;w components, as part of a 'Vietnam in Retrospect' issue.]