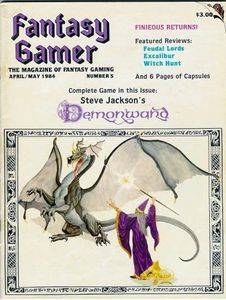 Demonwand represents a struggle between powerful wizards for control of a magical land. The only human characters in the game are the Wizards themselves and the greatest warriors; ordinary mortals stay out of the way when dragons battle with demons and giants. The Wizards attempt to rally neutral beings to their cause, and to hamper their opponent's efforts by moving the very terrain itself. The landscape is enchanted, and its mountains and forests are subject to powerful spells. With these spells, the magic portals called Gates, and his own forces, each Wizard hopes to give his rivals their death blows. The winner is the last Wizard left in the land. Published in Fantasy Gamer #5.