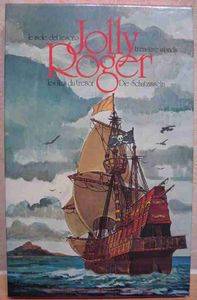 From the Italian company International Team comes this fairly simple game of piracy on the high seas. On a map that can only be considered a fantasy world you sail your galleon around the outer islands picking up treasure chests in the hope of delivering the treasures to his island in the middle of the board. Movement is handled by way of a wind disk. Every 3 turns this disk turns and the wind will be coming from a new direction. A ship always moves in a straight line that can be at a diagonal. If it is sailing in the direction of the wind it must move 4 spaces. If in a diagonal with the wind it must move 5 spaces. If perpendicular to the wind movement is 3 spaces. If diagonal against the wind movement is 2 spaces and if against the wind 1 space. The wind rotates in a rigid sequence so you can always plan what your ship will be doing. If a ship runs onto land it is sunk. A ship can stop short of its full movement if it is in a harbor square of which each island has one. On the outer islands this is where a galleon picks up treasures and each may carry up to 3. The board wraps around on itself so if a ship sails off an edge it reappears on the opposite side of the board. There are 6 dark areas on the seas that can become storms. The start player rolls 2 die at the beginning of his turn and puts a marker on the corresponding areas. Ships cannot enter these and ships that are in these areas cannot move. Each player also has a frigate. Frigates attempt to pass over another ship, regardless of the type, which will sink it. A sunken ship will always reappear at that player’s island at the start of his next turn. Frigates may not dock at harbors so they cannot end their movement short when passing over one. Ships sunk have their treasures returned to the bank. You play until a player has collected an agreed to amount of treasures. The rules suggest 8 to 20. The rules take up 3 small pages of which half the page is rules in another language. There are also 4 illustrations in the rules so you end up with about 1 page of rules. Some things are very vague though. How the Disk of Winds is used is not very clear. Here logic can get you through. The islands in the center are not marked as belonging to anyone so I have always had each player put a treasure on one to claim it. We have also played that the islands belong to no one player and you just need to get you treasures to an island. This makes it a lot easier to dock and drop off treasures.