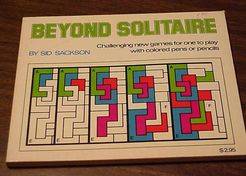 Contains six paper-and-pencil games meant to be played by a single player, including Four Color, Pinball, Profit &amp; Loss, Mountains &amp; Valleys, No Way, and Buried Treasure (which is not to be confused with the later Sackson game of the same title that is a re-theming of Das Super-Blatt). Part of a series of five paper-and-pencil game books by Sid Sackson, including Beyond Competition, Beyond Solitaire, Games of Art, Beyond Words, and Calculate!.