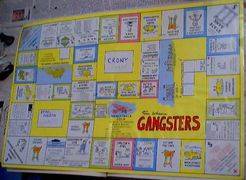 A Tom Wham game showing up in Gameplay Magazine, January 1984. Although the game superficially resembles Monopoly, instead of becoming the richest player by bankrupting everyone else, the goal is to be the first player to raise enough money to fly "south", i.e. somewhere in Latin or South America. This is accomplished by carrying out the usual Mafia activities during the Prohibition Era: bootlegging, racketeering, narcotics smuggling, robbery, bookmaking and Al Capone's favorite.. income tax evasion. Obstacles to achieving your goals include gun battles with other mobsters (players), police chases when robberies go wrong, and stints in the hospital recovering from gunshot wounds, or being sent up the river to the Big House. To aid you in your quest, you hire cronies to carry out your bidding, and gain influence through "power tokens". These can be used to bribe city officials when you end up in court. You can also run for Mayor, which increases your influence even more. While all of this sounds very serious, the game is actually quite humorous, with everything being done in Tom Wham's inimitable cartoon art style. For 2-6 gangsters.