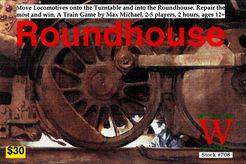 Roundhouse is an interesting game from Winsome where players use a limited set of action points to move locomotives into repair stalls and get them repaired. The name comes from the fact that a turntable (in concept)is used to take trains from three input points and move them to five different repair bays. Players deploy workers at the bays, and when the locomotive is repaired and released everyone who contributed to the repair gets paid.