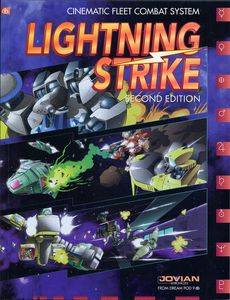 LS is a very fast game that can be played with miniatures or counters. Die rolls are very simple, allowing the inclusion of several ships per side. Layout and artwork of the book is very good. Rules are clearly written and simple, with optional rules adding a little more complexity. From the back cover: Lightning Strike is a game of tactical fleet combat set in the universe of Jovian Chronicles. Players take the part of ship commanders in the conflict, viewing the battle from above and giving orders to the participating units. This book includes basic rules and counters allowing players to take the side of either the Jovian Confederation or the Central Earth Government and Administration (CEGA). -Quick Start rules to start playing immediately; -Full rules for fielding exo-armors, fighters, exo-suits and warships; -Advanced rules for aces, boarding actions and electronic warfare; -Game statistics for the major Jovian and CEGA combat spacecraft; -Six full-color counter sheets