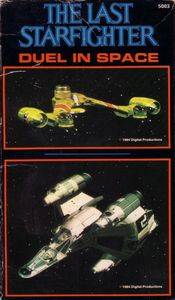 Based on the eponymous film, The Last Starfighter: Duel in Space puts its players in the roles of opposing starfighter pilots engaged in a battle. The game is played out in a repeating sequence of play. Players first secretly plot the heading and reveal them simultaneously. They then use the Navigation Wheels, a custom 3-layer disc, to resolve the effects of their movement. By rotating the layers of the wheel in accordance with their crafts' headings, the players learn which of their weapons can fire at their opponents. They then roll dice and consult a table to determine the effects of their weapon fire, recording damage on their cards. The game ends when a player has inflicted 10 points of damage on their opponent's starfighter. A solo game variant is available, dictating the opponent's actions by dice rolls.