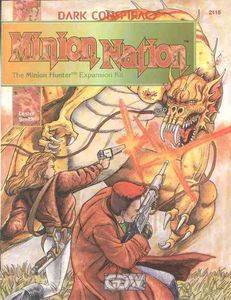 This is the expansion kit for the Minion Hunter game by GDW. The following text is from the expansion kit itself. If you've played "Minion Hunter", this kit will provide you with options and background to make your play more satisfying than ever. If you've never played "Minion Hunter"...you're missing out on a good time. Included in this package are: - New rules options, for grimmer, yet more cooperative games. - Expanded encounter tables, for further variety in play - including a table of random Plot Card results! - 16 new Equipment Cards, including Empathy-enhancing items, a second Wildey Wolf (for two-fisted shooting!), and even minion equipment you can capture at Dark Encounters! - Designer Notes, with topic-by-topic, space-by-space, encounter-by-encounter comments to further flesh out your understanding of "Minion Hunter" and its treatment of the "Dark Conspiracy" horror RPG world. A new Dark Age has come. Never has the world been so grim...nor the battle so heroic! Expands: Minion Hunter