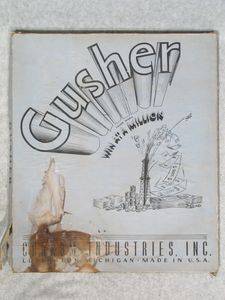 Gusher is the direct ancestor of Oil Power and King Oil and is similar in concept. The board is a hollow box with irregularly shaped wooden spacers between the top and bottom. The game board is shaken during the game setup to randomize the location of the wooden spacers (oil deposits). The playing surface is divided into 60 real estate parcels, each of which has from one to 10 drilling sites. Players bid to lease parcels, and once they acquire one or more leases, they may drill on their leased tracts at a cost of $10,000 per hole. This cost of drilling is lost if the result is a dry hole, but there is a large payoff for successful wells ("gushers"). Players begin with a stake of $300,000. The game ends when a player accumulates $1 million. Although the game is largely a contest of luck, there is some strategy. Successful wells tend to be clustered. Thus tracts that are contiguous to parcels on which there are successful wells are more highly valued. Furthermore, because gushers produce revenue for the owner with each turn, successful wells obtained early in the game are considerably more valuable than those obtained near the end. Play proceeds in turns, and each player upon his turn may designate one or two unleased tracts for bidding or he may choose to drill if he has previously acquired one or more leases and has undrilled sites. Players may sell or trade leases and drilling sites, and they may form partnerships to acquire leases or share the cost of drilling. In a typical game setup, approximately 15% to 20% of the drilling sites will be gushers. A game generally requires about 20 complete turns. Early 1940's editions employ a 20.5" x 20.5" game board; these feature boxes with deep, dark colors and silvered print. Later editions employ a 15.25" x 15.25" game board and light colored boxes with black print. Game Contents: game board, General Information and Rules, Gusher Game Money, metal drilling derrick, round cardboard markers for leased tracts, round cardboard markers for dry holes, and round wooden "tanks" to collect oil from successful wells.