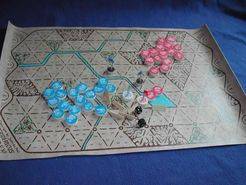 Inspired by the 19th century war between Prussia and Austria, this is a tactical-level battle game. The two-sided color map features various terrain in a triangular grid. Units, including different types of infantry and cavalry, are represented by wooden disks. Target locations are indicated with flags placed at the intersection of the triangles. Victory is won by controlling the spaces around these key locations or by defeating the enemy field marshal.