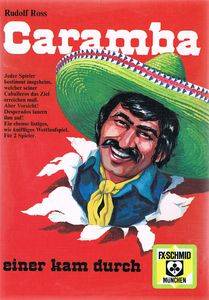 Caramba is a racing game for two players where each has a set of runners that are trying to make it to the finish and a set of hunters that attempt to stop the opponent's runners. The game consists of a board, 3 runner pieces per player, 4 hunter pieces per player, a card identifying each of the 6 runners, two dice and a set of rules. After all the pieces are in place, the game commences with the hidden selection of each player's "favourite" runner. This is done by placing the card representing this runner face-down but in an open location. Runners are distinguished by the colours of their sombreros. Rolling the dice, the players move either their runners or hunters around the multiple paths on the board. Taking care of special board spaces and certain limitations on movement, each player will be moving runners towards the end goal while trying to capture an opponent's runners with his/her hunters. When a hunter captures a runner, the player that was attacked reveals the hidden runner card. If the favourite was captured, the game ends. If not, a new favourite is secretly selected and the hunter must return to the start. The main goal is either to stop the opponent's favourite runner or to make it to the end with your own favourite.