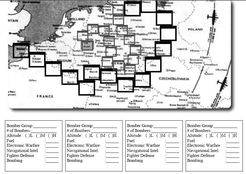 WarpQuest is an abstract game system that depicts goal driven scenarios. In a typical WarpQuest game scenario, each player controls a collection of units attempting to reach an objective and be the first to return back to the starting point. The units could be a party of adventuring archaeologists hoping to recover a lost artifact, a squadron of bombers attempting to hit a military target and return home, a band of samurai seeking to vanquish marauding bandits, or a company of mixed creatures seeking to destroy a piece of evil ornamental jewelry that has the nasty habit of trying to control the minds of all free creatures. The scenarios that use the WarpQuest engine will hold the details. A Victorian themed version of the system in presented in the Artifact Core Rules. Warp Quest was an entry in the 2002 Microgame Design Contest. The contest edition included War Over the Reich, Lost Continent of Atlantis, and Mummys Tomb. The following games utilize the WarpQuest system: Alien Queen Brain Beastmaster Quest Constantine Dantes Inferno Depths of the Earth Destroy the Rail Road Bridge Greek Heroes Hidalgo In the Nam Into the Valley of Death The Isle of Dread Jail Break Lost Continent of Atlantis Mummys Tomb Palace of the Silver Princess Pirate Island Quest for the Grail Rabbit Run Score The Shadow of a Dark God Sharpe's Adventures Surviving the Gulag Voyage of Sinbad War Over the Reich Where Eagles Dared