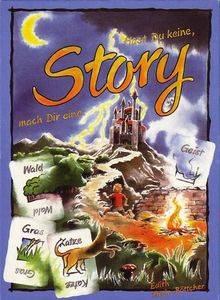 Players alternate telling a themed story, weaving into the tale objects from the five illustrated Story cards face up on the table. When hearing an object named, the first among the other players to place their hand on the correct card claims it, replaces it with a new card from the draw pile and becomes the new storyteller. Storytellers are encouraged to be deceptive, for instance saying "fog" when there is a "frog" card on the table. If a player falls for the bluff, the storyteller earns a card. The player with the most cards in their collected stack when the deck runs out is the winner.