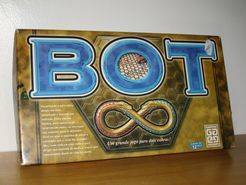 A relaunch of a late 70s release, Bot is a game in which each of the two players command a "serpent" abstractly represented as a line of pawns occupying successive hexes in the gameboard. Players organize and play their hand of cards to direct their serpents' linear movement across the board. To each hexside corresponds a color; each card has a color and a number. Thus, a Yellow-3 card allows a player to move his serpent three hexes in the Yellow direction. Once a serpent successfully reaches (hits) the opposing serpent, it "eats" and removes two of the attacked serpent's pawns from the game. The same cannibalistic result is achieved if you successfully drive your serpent towards the enemy home base. Serpents may defend by biting their own tail, forming an impregnable ring, or by using the board's "underground tunnel" for a quick escape. First player to reduce the enemy serpent to nothingness is the winner. The name Bot is a homophone for "bote", a Brazilian Portuguese noun meaning "serpent strike".