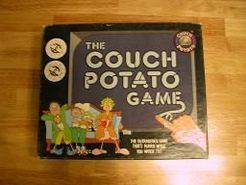 A television commercial-watching game designed for rapid party play. Players get a hand of five cards, either objects or special "Goof Proof" cards. The game owner selects a channel to watch on television, and when the commercials come on, players race to either find their own objects, or the objects of other players' face up cards so as to block them. Everybody is trying to get rid of their hand first to win the round. Perhaps the most engaging aspect of this game is that the card tray is specially designed to hold snacks as well. The rule book can objectively be designated as quite humorous.