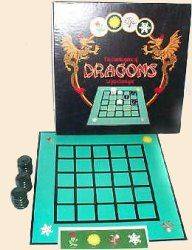 Played on a 5x5 square board, this Canadian game is subtitled "The Classic Game", presumably because it is an orientally themed uber-variant of Tic Tac Toe. Each of the 3x3 corner quadrants of board represent the different seasons, and the goal of the game is to get a row of three stacks of counters placed in one of the seasons. Players alternate placement of counters on empty squares until such time as somebody gets three in a row in a season (or overlapping seasons). When a row is formed, all single pieces in the involved seasons are removed, and the player's removed pieces are stacked onto the last played piece of his color. One goal should always be to minimize stack sizes, because when you run out of pieces to play, you have to use up a turn reclaiming a non-critical stack from the board. The first stack a player forms will of necessity be at least three high, but subsequent stacks can be held to two piece height due to the fact that stacks themselves are eventually used to help form rows, and only single pieces are removed to form new stacks. First person to get three stacks within one season wins.