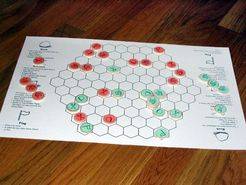 This is not the simple game played with your hands **** A two player game of strategy in which each player has a set of Rocks, Scissors, and Papers. Each type of piece has different movement abilities on a hexagonal board. They capture one type of piece but are captured by the other type (Rocks capture Scissors but are captured by Paper). Each type of piece interacts differently with pieces of the same type. Two Paper pieces stack on top of one another while Scissors lock together and Rocks knock one another about. The goal of the game is to capture the enemy's flags.