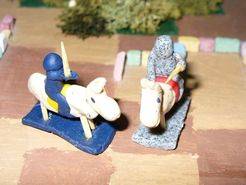 http://www.dvgc.com/ The Civil War Battle Game represents a major departure from conventional wargame design. There are no complicated rules to memorize; no plethora of numbers, tables and charts to study, analyze and confuse the players. Instead, players must concentrate their energies on implementing the sound military principles of maneuver and attack to defeat their opponent. Emphasis is placed on decision making ability and on the players' skill in properly coordinating the actions of their various units. There are no "tricks" to be learned in this game. SQUARES - The Civil War Battle Game contains no luck or chance element s; no dice, no spinners, no chance cards. All results are based purely on the individual player's decisions made throughout the course of the game. Players will win or lose based on their ability to outwit their opponent. You won't get lucky in this game; unless your opponent makes a mistake.......(first).