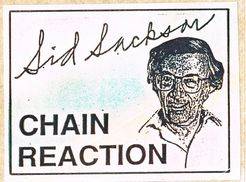 This pure abstract strategy game is a relatively unknown work by Sid Sackson. Similar in some ways to his 1981 Spiel des Jahres winner, Focus, it is available commercially in a German edition, but can be played with materials improvised from a chessboard and checkers. From the translation: The players take alternate turns of up to five segments, trying to move game pieces from their home squares over the opposing goal line, in order to score points. After the first segment of a turn, only towers made of two game pieces may be moved. Each tower is broken down during its move, and one of its pieces may be used to build a new tower on another square. Intelligent use of this move technique can lead to "nuclear chain reactions", in which up to five towers are involved. There must never be more than one tower on the board at one time. Any tower on the board must be moved during the following turn segment by the player whose piece is on top. The game ends with the achievement of an agreed-upon number of points. The game was originally published in 1989 in a tiny cardboard box by Ferdinand de Cassan. In 1990 it was published by Hexagames in their "Exklusiv" series, and later (1993?) by Abacus in their very similar Abacus wood box series.