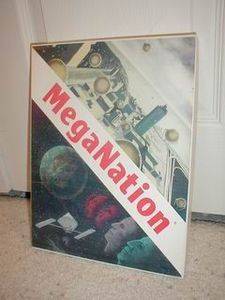 MegaNation is a game of worldwide power politics. Each player runs a nation in a fantasy "modern" world. Each nation controls one or more areas on the board and is defined by "factors" assigned each turn to various attributes: Population, Education, Industry, Military, etc. The winner is determined by a formula at the end of the game (which occurs on a random turn) using these attributes. Each turn consists of random events (generated by die rolls), followed by allocating of 8 new "factors" to their nation's attributes, followed by actions on the board. There are strategic resources (oil, gold, coal, ore, and rare minerals) which affect the allocation of factors and/or movement on the board. Combat can occur between nations using military factors from the nations' attributes, resolution done by drawing as many numbered chits for losses as there are opposing military factors. These can be modified by die roll, if desired. Negotiation between players for resources, military assistance, travel routes, etc., is highly encouraged and virtually required by the design of the game. From the designer October 24, 2009: MegaNation continues with Collegiate Edition 3.3 and a simplified "Family Edition" for the "little and older folks"!