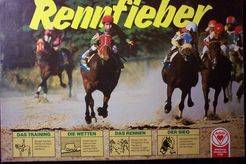 Rennfieber is a horse-racing game where players auction for, train, bet on and race horses. In the first phase of the game players auction for horses, trying to gain those with the best potential form statistic (form). Form influences starting placement and the movement of each horse. This statistic starts low but can be influenced by winning and losing races or through training. The pursuant training phase also allows the opportunity to collect cards that can influence form, aid in races and win money. Before a race, players select which of their horses they wish to enter. Bets are placed on horses based on their form, starting position and taking into account any cards a player has to influence the race. During the race, players roll a die and compare the result to the horse's form to determine the movement value. Horses can move in and out of lanes based on the positions of other horses and any special cards that are used. At the end of the race, bets are resolved and a predetermined purse is paid to the top 3 horses. Play proceeds with a second race followed by a third stage of auctioning, training and racing. At the completion of the third race, the player with the most money wins.