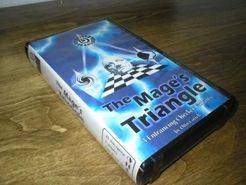 The Triangle awaits. You are a restless apprentice who has worked hard for the last ten years studying and practicing to become a Mage. You are ready to take your last test before you can advance onto the final training to become an actual mage-extraordinary. In this test you must play against another apprentice and win the majority of 3 apparently simple games. THE WIZARD'S DILEMMA - A checkers variant where each apprentice can cast the inscribed magical symbols on the board. THE SORCERER'S ABYSS - Normal game board squares have been changed into hexes. In addition to this, the element of fate has been added. THE SHAMAN'S CIRCLE - Pieces move in straight lines as well as in circles. This game is the trickiest of the three and should be played carefully. Surprise wins are not uncommon. Do you have what it takes to make it through the Mage's Triangle? You must play the triangle to find out.