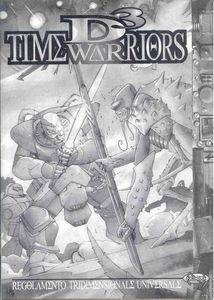 "D3 Time Warriors" is a universal rules set for miniature wargaming at a skirmish level. The first publication of the game, in the italian gaming magazine "KAOS", included cardboard counters and army lists for playing the game in a science fiction setting, later used also in the "Sandsplatters" game (based on the same rule set) and in the "Nemesis" starship combat game.