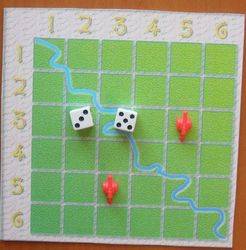 A relatively simple, tile-placing strategy game in which players choose an army to portray (Orc, Elf, Human, Dwarf). After two dice are rolled, players can place units of their army on a small 6X6 board according to the coordinates on the dice. Playing units in this manner costs "Shield Points" (which go into a kitty obtained by the player who deploys all his units first) and despite the light theme of combat between units, the game is actually won by the player who has the most shield points at the end (thus being the most resourceful). OrkoMondo is part of KidultGames' series of free, downloadable games.