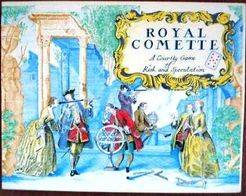 Subtitle: "A Courtly Game of Risk an Speculation" Themed on the discovery of a comet by Halley in 1682, this is an imitation of a courtly game of the period. In Royal Comette, players place tokens on astronomical sections on the board, lay cards in a sequence, and when your card matches a section, you collect the tokens. Unlike the title, there is little speculation in the game. Game Play: At the start, all players (including the dealer) place a token (a small yellow rod) on each of the eight compartments of the game-board. The dealer then places extra tokens on certain compartments and hands every player and equal number of cards. One extra hand of cards is dealt to the center of the game-board. When all cards are equally divided, the remainder cards are added to the center. The dealer turns the last card over to determine the trump of that round. If the trump is a certain card, the dealer instantly wins all tokens on the board, else, the round is played. A round of play consist of players playing card out and calling their names (e.g. the Ace of Spades). The next player is the player who has the first next card in that sequence. The round comes to an halt when either the card to be played cannot be played (it was already played before or is in the center 'hand') or when all players have been dealer once or when a previously agreed number of rounds has been played. Players collect tokens from the board if they have won the round. Winning the round depends on the cards a player has in hand. The player that has the most tokens at when the game ends, is the winner.