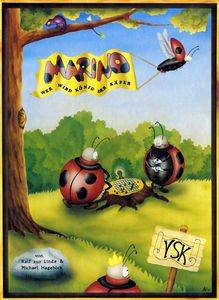 (From the rules) Who will become king of the bugs? There are two paths leading to the coronation of the king of the bugs: the direct way is to crawl across the board. But this only works if your opponent isn’t there! Alternatively, one can sort through the bluffing of your opponents and defeat their Marinos. Note, though, that each error brings that opponent closer to the throne... The prototype "Marieno - Der König der Käfer" (Marieno, King of the Ladybirds) was first presented by the authors during the 1991 Autorentreffen (Game Designer Meeting) in Göttingen, and it went on to make the top 10 of the prestigious Hippodice Design Competition in 1992. It was published the same year by VSK-Erwachsenenspiele with a much shortened title.