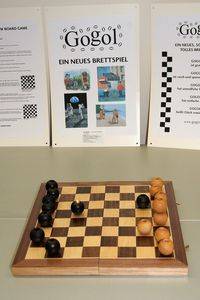 Gogol was conceived in a prison, where no paper or pencils were allowed. Designed to be playable under the most primitive circumstance, each move in Gogol sets off firecrackers of endless possibility! There are two players (White and Black), each having one king and eight pawns at their command. On a common chessboard, place eight white pawns on the first rank and eight black pawns on the eighth. Then, the White player may place his king anywhere on the board, except on the second rank. Black, in turn, places his king anywhere except on the seventh rank. The game then starts, each player moving in turn. The pawns are free to move anywhere on the board, not being confined to moving along lines or diagonals! (You can think of this as "teleportation".) The king may move along any straight line or diagonal, like a chess Queen. If a piece begins its turn adjacent to an enemy piece, then it can capture the enemy piece by jumping over it (straight or diagonally), and landing into an empty on the other side of (and adjacent to) the captured piece. The player who captures the enemy king, or reaches the last rank with his own king, wins the game. For more information, please go to http://www.di.fc.ul.pt/~jpn/gv/gogol.htm