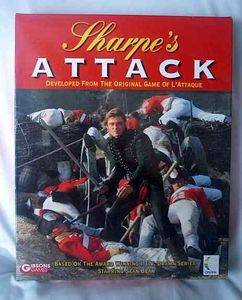 An edition of the very old game L'Attaque, most familiar now as Stratego by Jumbo. This edition is themed on a very popular British TV series in the 90s called Sharpe, based on Bernard Cornwell's famous series of novels set the Peninsular Wars. Sharpe was a maverick British Major leading his troop in running battles with the French, mixing it up with the ladies and spies along the way. This edition has dozens of plastic frames which hold small cards illustrated with all the characters from the TV series, one side British, the other French. The Major beats the Colonel, the Colonel beats the Captain and so on, down to the Special Agents who beat the top ranks. An nice version, but loading and unloading the cards into the frames is clumsy. Re-implements: L'Attaque