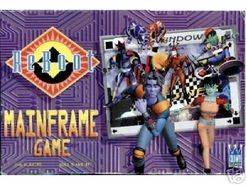 A simple game based on a popular 90s kids cartoon series called ReBoot, which had very high quality computer graphics and characters themed on computer jargon. Players are either sprites or viruses trying to protect or infect the CPU where they all live. The board is a circle of paths, players roll and move, collecting 6 chips to win their goal, with Quantum shakes as hit points, magnets, Vid-windows, modems and so on. The graphic design is strong, the rules written in a very modern style, following the computing theme very heavily for a kids game, down to having a whole flow-chart on the back page! The board is very light card fan folded into a wedge, but there is a basic, sloppy production error in the tokens. You'll need to get your marker pen out and over-write some of the tokens if 5 or 6 play, which is a shame.