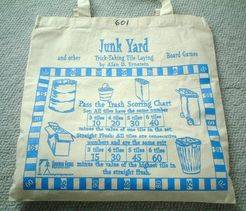 Throw a set of dominoes, a deck of cards, and a game board into a trash bag. Shake it up really well then dump it onto the table. Since you will still only have a jumbled set of dominoes, cards and a board, you should try the Junk Yard of games contained in this bag instead. We have taken come of the best features of cards games like taking tricks, passing cards you don't like to another player and trumping your opponent's clever play. We've added the great things about dominoes like standing them up in front of you instead of having to hold a deck of cards, stacking them up, knocking them down, and the solid thunk one makes when you play it on the table with authority. Add a board (well, actually a bag with a board printed on it) to play these games on and make your tiles look better than most other trash and you have Junk Yard and other Trick-Taking Tile-Laying Board Games.