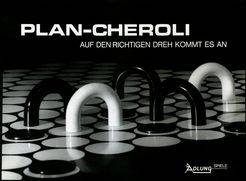 In Plan-Cheroli each player has three arches which start at one corner of the board and must be moved to the opposite corner. On each turn, one arch is moved by rotating one leg of the arch around the other leg, with other pieces blocking the rotation. Several variants are included. There are chips which can be placed on the board at the start of the game to block certain spaces, creating different board configurations. Alternatively, all the spaces can be covered with chips, and the goal of the game then becomes to capture the most chips by moving onto them. In addition, there is a die which can be used to give each player one to six moves per turn instead of the standard one. Re-implements: Cheroli