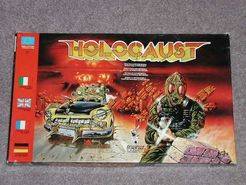 FROM THE INTRO: 2028, a fateful year for the human race, the Third World War began about 30 years previously. By now the world is for all practical purposes destroyed as the nuclear catastrophe descended with undreamed of disastrous effects on the human race. The face of the earth is changed and numerous areas around the globe are contaminated and destroyed. Now mankind must fight against aliens, mutants, delinquents, looters, criminals, disease, radiation, and all the other ills the war has brought. The main objective now is to survive and to attempt to recreate human society as much as possible. Holocaust is a fantasy board game in which a hero combats against the horrors of a world devastated by war. He must fight for his family, find it and save it by leading it out of the devastated city towards the Road to Freedom... Each player takes the part of Michael. With the help of the cards he must find everything he needs in the city and then travel along the Road to Freedom and thus leave the city. An important difference with this game is that to win it, it is not necessary to come out first. In fact, since the winner is the player with the most points, even the last to come out can be the winner. Content: 6 lead figures to be painted, 6 player cards, 181 adventure cards, 37 market cards, 6 lead cars to be painted, 1 petrol station and 2 lead repair shops to be painted, 3 dice, 400 markers, paper models to be build (optional), and rules. This game comes with rules and cards in multiple languages (Italian, French, English, and German).