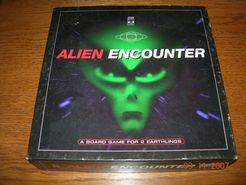 Aliens Attack!Will you be strong enough to prevent their attack or will they consume the entire galaxy? This game is a re-themed version of Pente with a small twist. It consists of 80 counters (40 red and 40 silver) and an 8X8 battle grid that represent space. Each player takes 40 counters. One player represents the Aliens that are attacking the galaxy and the other is the defending force. There are several starting positions that players can choose from in order to start a game. Each starting possition presents players different chalenges. The goal of this game is to manage to control the enemy territory and try to avoid losing your base. Players add counters in turns to the board in order to block enemy counters and create lines of their counters. Once a counters has been put to the board it can not be moved. The aim is to align counters of the same colour in vertical hirizontal or diagonal lines.In order to capture your opponents counters you must flank in pairs your opponents counters in any same direction. The winner is the player who at the end of the game has captured more enemy counters or the player who has captured 5 enemy counters in a row.