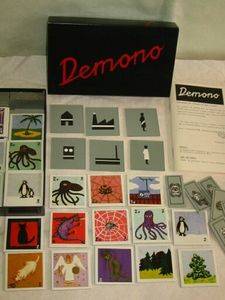 A very curious game from Switzerland, designed by "PM" from its novel 'Tripura Transfer' published in Switzerland and Germany. A 2 player tile placement game in which one player represents the Coloured world of the Demons, whilst the other represents the Grey world of Concrete! The tiles have a grey side showing workers, police (baton raised!), managers, houses, schools, factories, offices and computers. The other colourful side shows creatures like penguins, spiders, octopii, cats, mice and more fantastic creatures like chimera, sphinx, dragon, and concepts like death, explosion, ruin, nature, puppet-theater, dice, maze, TV and free-public-radio! The Colour tiles have values, multipliers and different abilities, such as removing tiles, affecting distant tiles and so on. These are not obvious, so constantly refering to the rules will slow the game. Grey has a starting fund and must buy and place or move tiles to generate income. Colour must turn Grey tiles over to disrupt the boring real world and prevent Grey from finishing with a profit. The game can be made harder for Colour by giving Grey more starting money. A totally weird and original game, very nice production, with lovely tiles painted in a naive style. Rules in German, French and English.