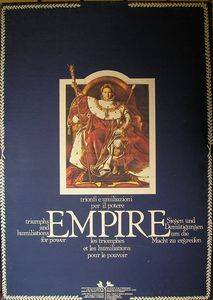 Empire - the triumphs and humiliations of power. The game consist of a grid map of Europe at the center. Players must control 7 adjacent areas of Europe to win. Each player is given 5 armies (represented by 5 metal miniatures) which can be given secret values of 1-5 to represent strength. For movement, a dice is shaken and the points distributed at will throughout a player's armies. When 2 opposing armies occupy the same space a battle occurs. Players state the values of their armies (a player can attack an opponent with more than one army), but in doing so can bluff this value. The defender can admit defeat and pay one 'power point' for every attacking army, or not believe the opposing declaration and cards are revealed. The loser now pays 2 'power points' per army. The strength cards are burned and new cards drawn by each player. For every 3 'power points' a player hold, they can control an area of Europe (by claiming it with 1 of their 7 metal towers). If a player runs out of points, a tower must be cashed back in and so a region is lost.